Our annual vacation to visit family on the farm in Washington has also yielded another benefit.  My brother-in-law, Justin, and I have been able to "pick a volcano" and take a hike into the pristine wilderness surrounding the monster domes. 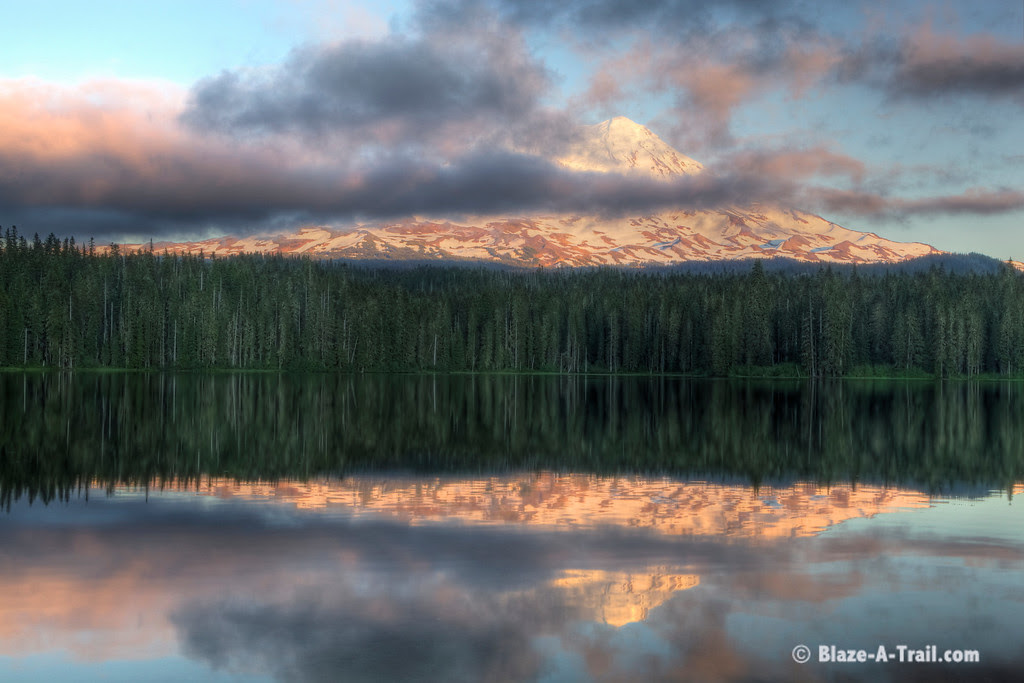 Last year we hiked Naches peak for an unobstructed view of Mt. Rainier (see Mt. Rainier Hike) and this year's adventure started at Taknakh Lake near Mt. Adams.  It can be really challenging to pick a day to hike where you can actually see a volcano.  In early August, Justin determined that our best chance to see one would be Mt. Adams as Rainier and St. Helens were likely clouded in.  This turned out to be the case.  As we pulled up to the parking area at the lake, we were blown away with this view: 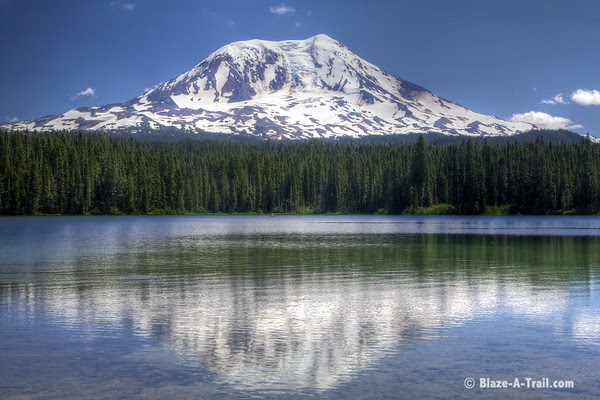 Justin is a Washington native and, while he has never hiked this area before, had a route all planned out: 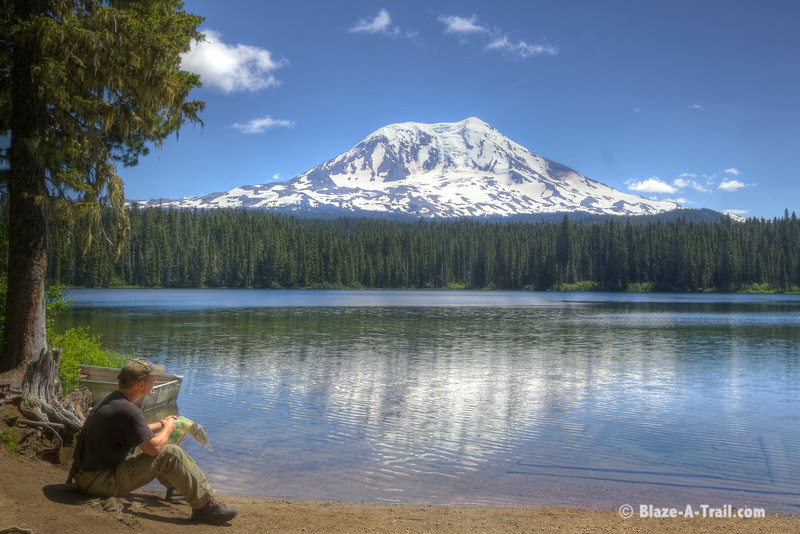 The hike would be a combination of several trails that would lead us to the base of Mt. Adams.  We estimated the round trip to be around 11-12 miles (give or take).  After making it around the lake, we entered an ancient volcanic flow, a strip of canyon filled with volcanic boulders, alpine trees and abundant wildflowers. 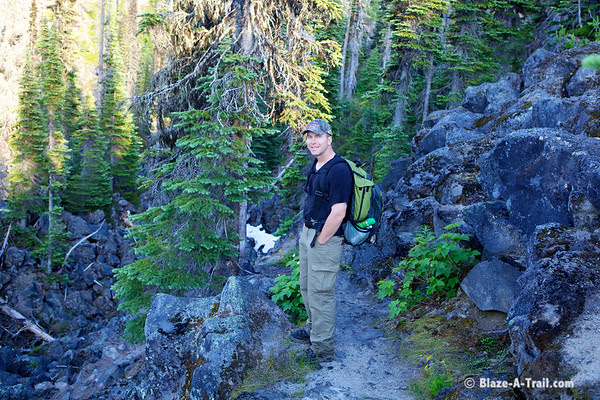 We also came across this scenic meadow: 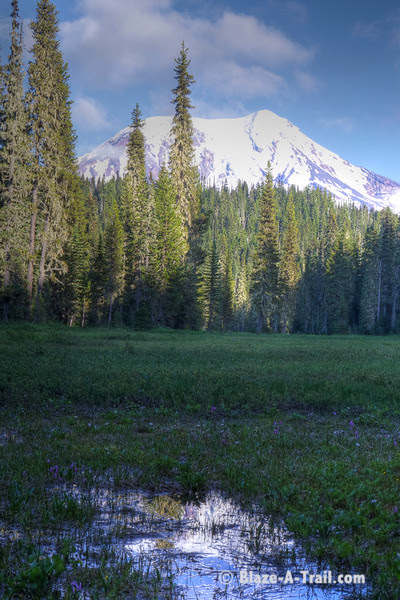 Our ascent through the forest up to the base of the mountain was met with snow, lots of snow.  WA had a long winter and summer was just beginning in the high country (it was early August when Arizona is typically 115 degrees).  The physical trail was no where to be found most of the way up as the snow completely blanketed the forest floor.  Justin was navigating by carvings on the trees, something that I have never seen in AZ.  There were also two sets of footprints in the snow that were ahead of us that day, probably the first hikers of the season.  It was reassuring that both of us had a full supply of wilderness survival gear in case we got lost and needed to survive overnight.  Besides the approximate 2000' to 2500' climb, the tromping through the snow with serious camera gear in tow was an incredible leg workout. 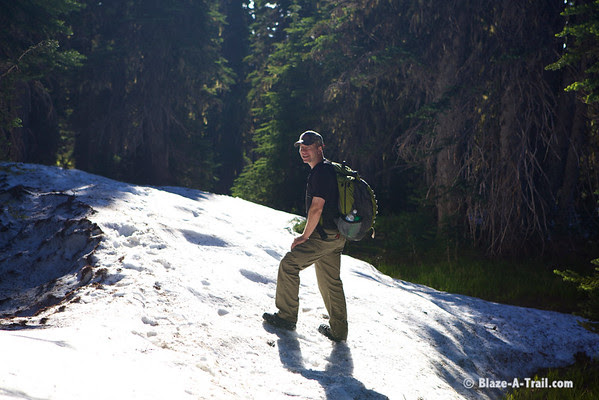 After the first few miles of the hike, we entered the forest and the volcano was nowhere to be seen.  It seemed like it would present itself around every corner, but then it wouldn't -- more forest.  I realized that when I could see the mountain, I had more energy and excitement and when I couldn't, it seemed like a long slog through the snowy uphill trail.  I distinctly remembered a message I had read years earlier about a sociologist who studied mountain climbers.  As climbers ascended up Everest, Denali, etc., a higher percentage of hikers made it to the top when the mountain itself wasn't obscured by cloud cover.  A smaller percentage of hikers would make it to the top when they couldn't see the mountain ahead of them.  The mountain didn't get any higher or lower.  It was the same with or without cloud cover, yet it had an impact on whether climbers make it to the top or not.  It's very easy to let the mind wander to how tough everything is, how your legs hurt, how this is taking too long..... and poof, you're turning around. 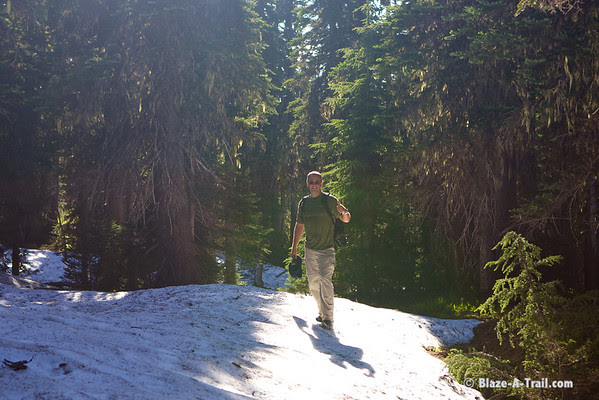 Justin and I spent most of the time keeping our minds off the difficult climb by chatting about what's important in our lives..... our families and our faith.  We also discussed the challenges of our jobs, but even that didn't seem to be as big of a problem when on a mountain away from it all.  I'm convinced that a retreat to the wilderness is some of the best medicine to keeping healthy.  After all, Jesus retreated to the wilderness quite often, sometimes by himself and often with a few of his friends. 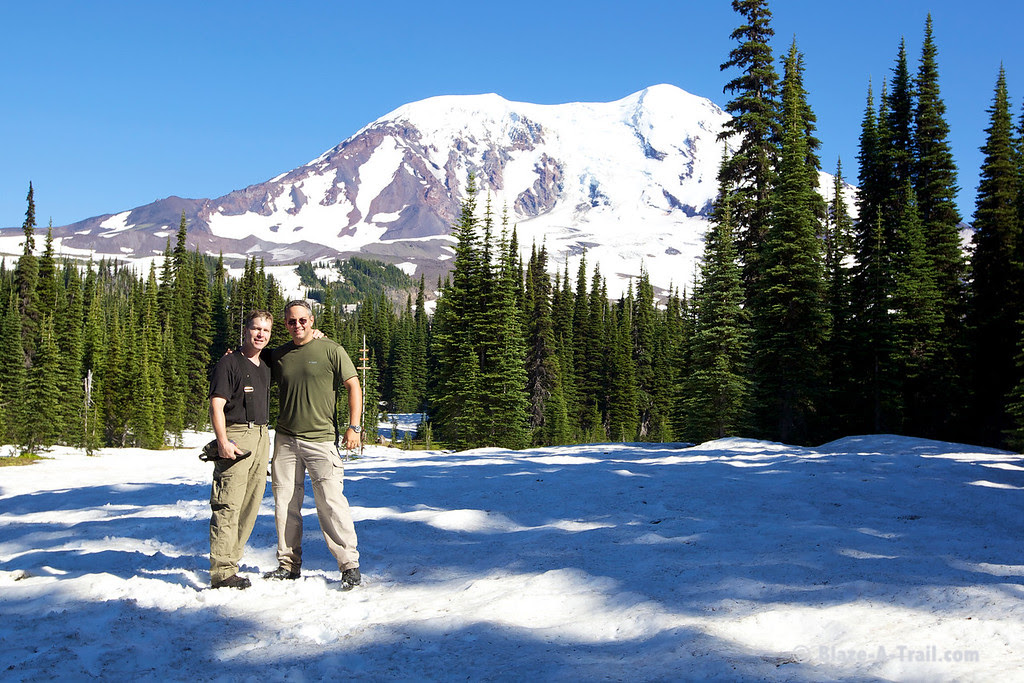 Coming down the mountain was fantastic.  We were in a hurry to make it back before dark.  Clouds were beginning to roll in and we were hoping for a spectacular sunset with the reflection on the lake.  We had a blast nearly skiing down the mountain in our boots.  We got back just in time for this.... 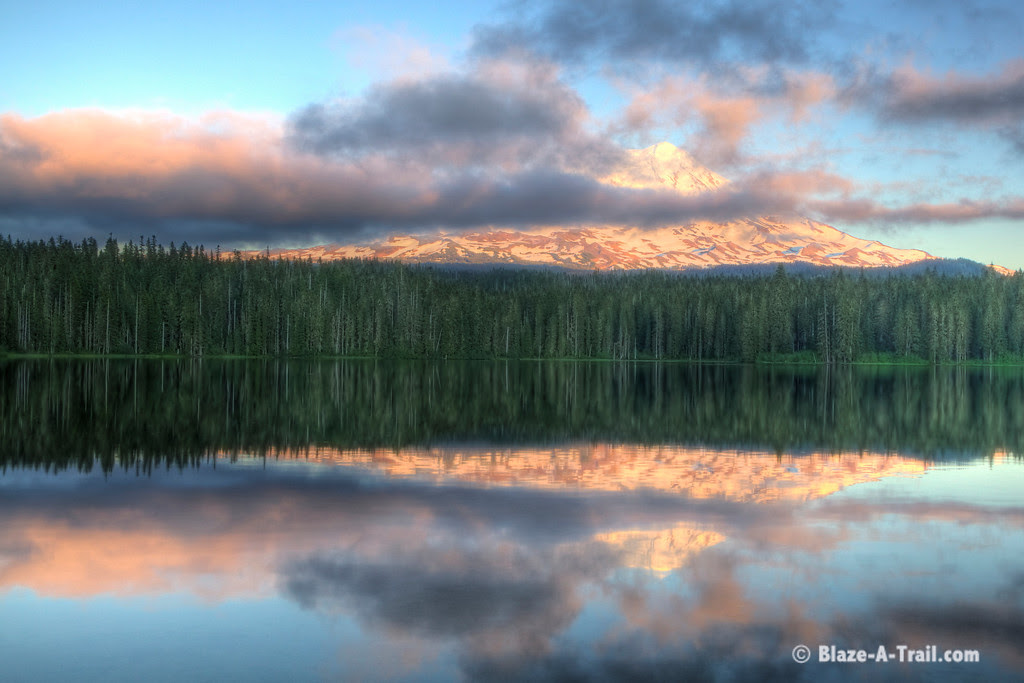 A week after this trip, I was to be heading back up a mountain in AZ for a men's retreat where about 400 guys would be attending.  The theme of the retreat was "THRIVE - An Adventure For Men".  Justin and I spent a lot of time thinking that we couldn't get much closer to thriving on this mountain.  He had a message from Psalm 34 for me to take back to the guys....

"Taste and See that the Lord is Good,
Oh the Joys for those who take refuge in Him"

When I'm having a rough day in everyday life and it's starting to lead me to an unhealthy place, you can often times find me outside staring at the top of Camelback mountain or thinking about the mountains I've been fortunate to climb or photograph.  Instantly I'm drawn into a place of peace that my Creator is in charge of the universe and directs my path.  The apostle Paul said to set your mind upon the heavenly places, not the ground beneath your feet.  It's great advice in the midst of cloud cover.

May you find a Peace that transcends all understanding! 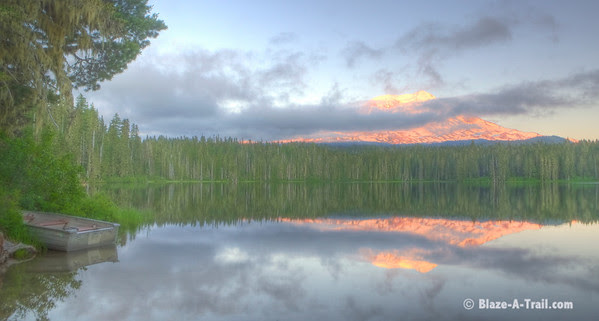