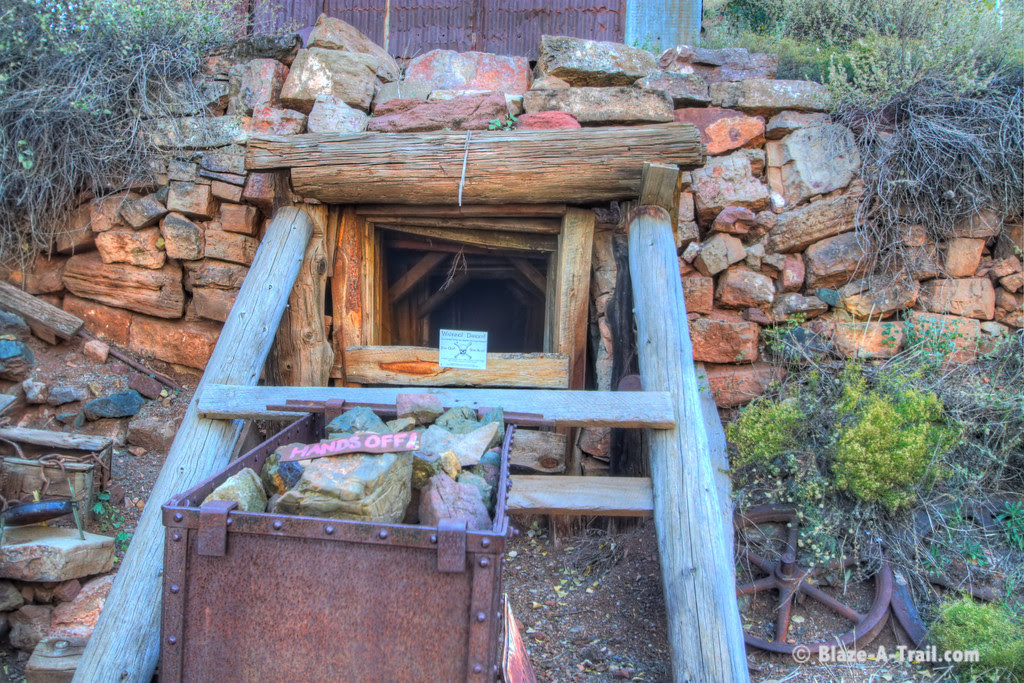 The drive through Jerome is a must for everyone.  Last November a colleague of mine and I were traveling through Jerome and we came across a strange road that had a sign marked “Gold King Mine”.  About 2 miles down the road we started to approach an ancient copper strip mine and then heavy mining machinery along the road.  As we approached the Gold King Mine, we were both wondering if we should go any further….. 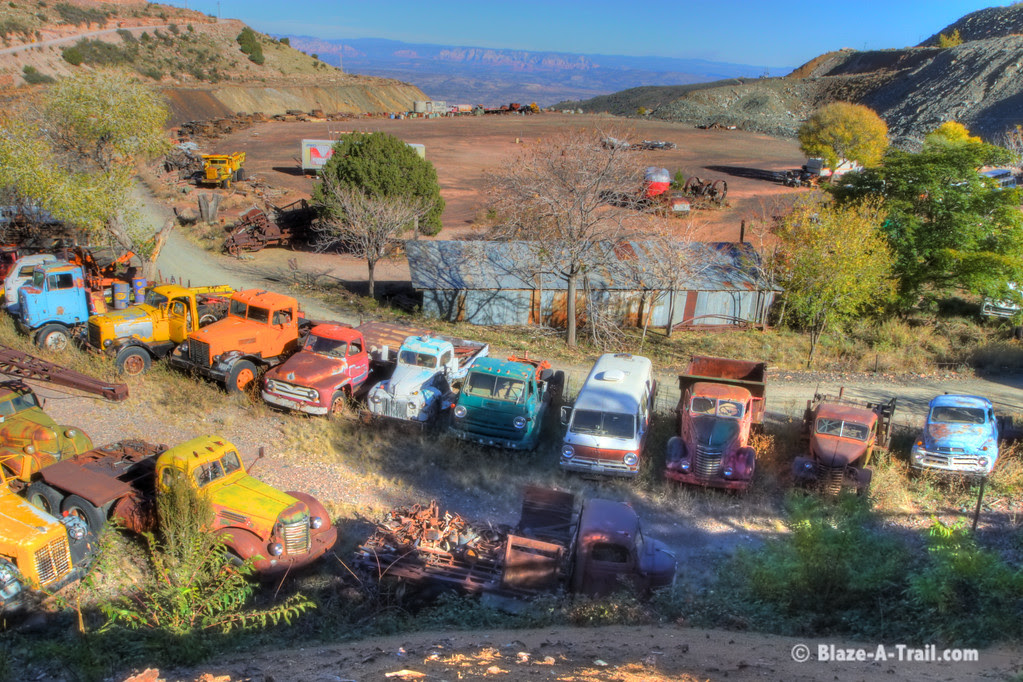 Fortunately, we went through the main entrance and were pleasantly surprised by the authentic turn-of-the-century mining camp.  In addition to the mine, there were antique gas engines, a blacksmith shop, working sawmill and over 100 antique trucks and mining equipment.  The vintage Caterpillar machinery was a favorite of mine... 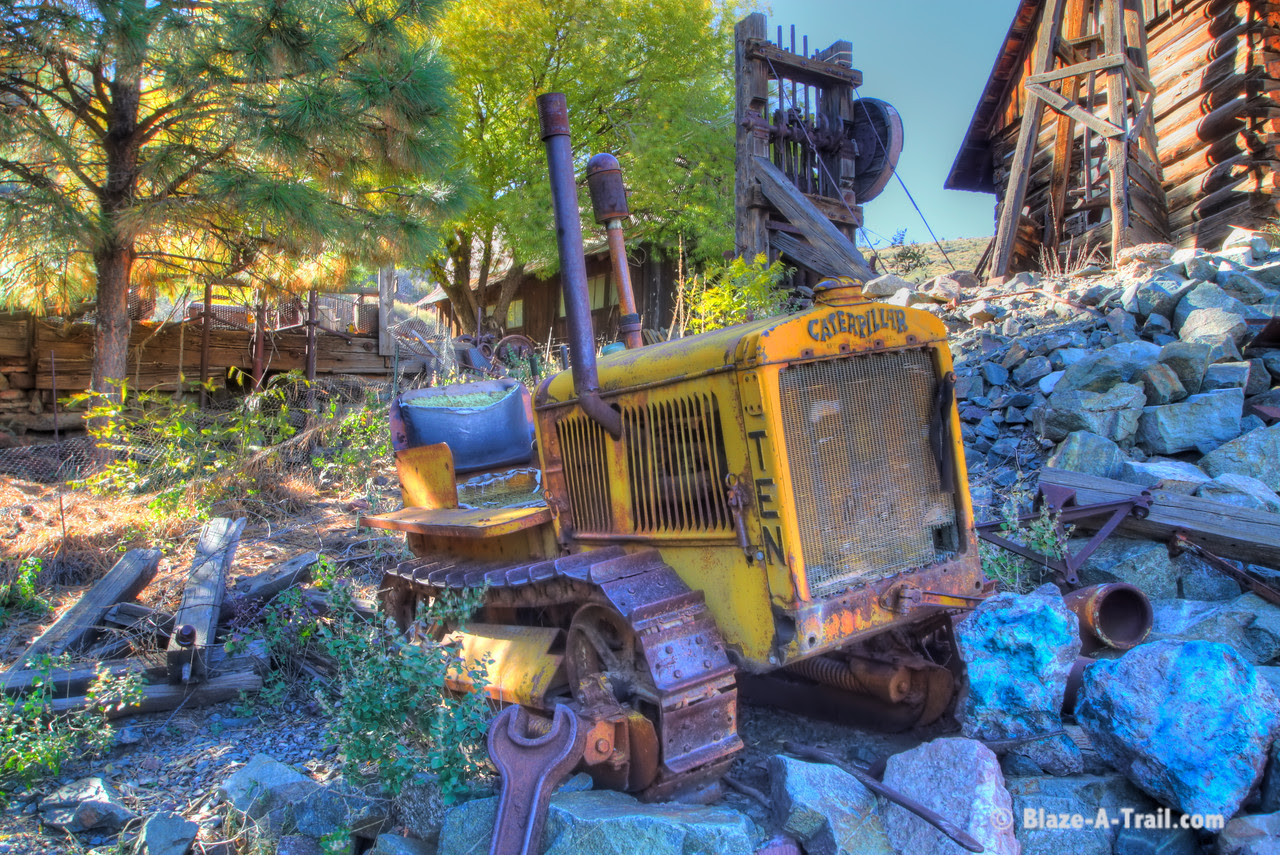 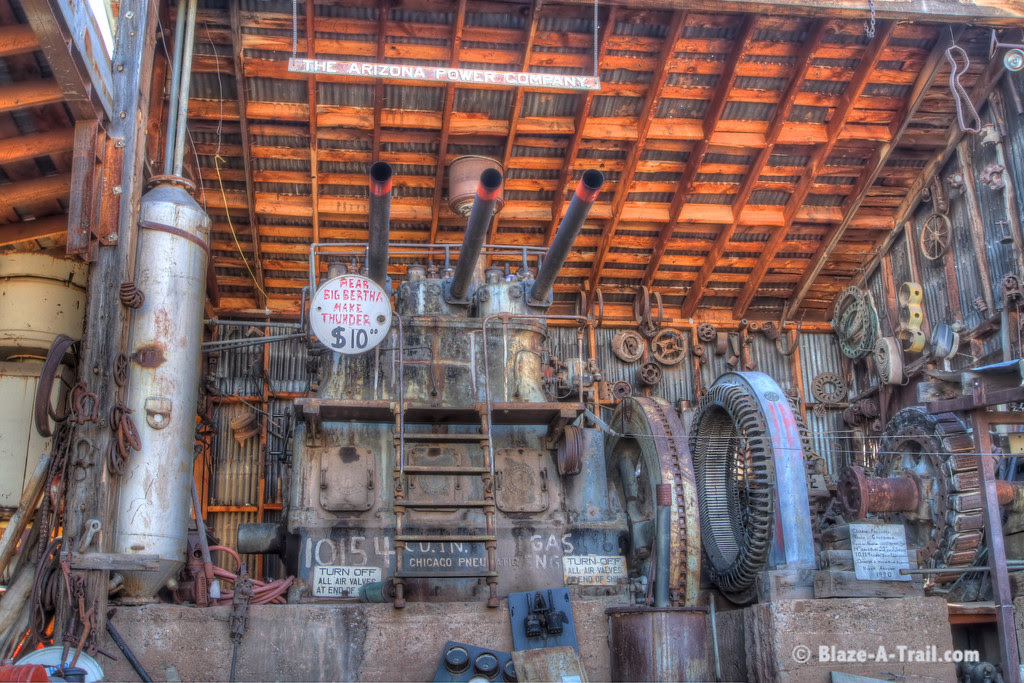 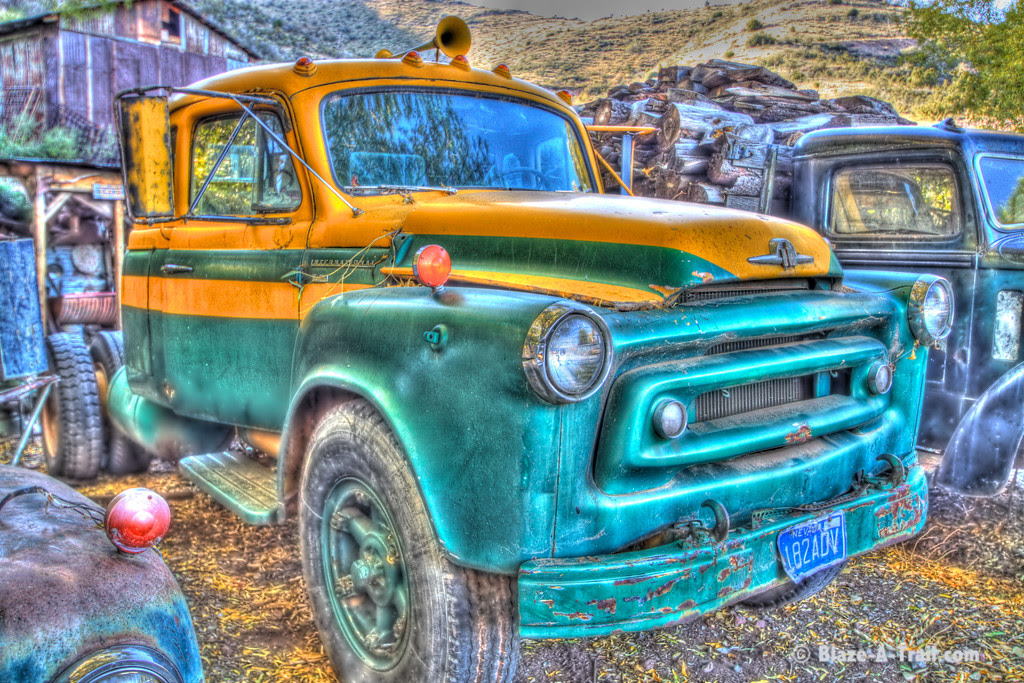 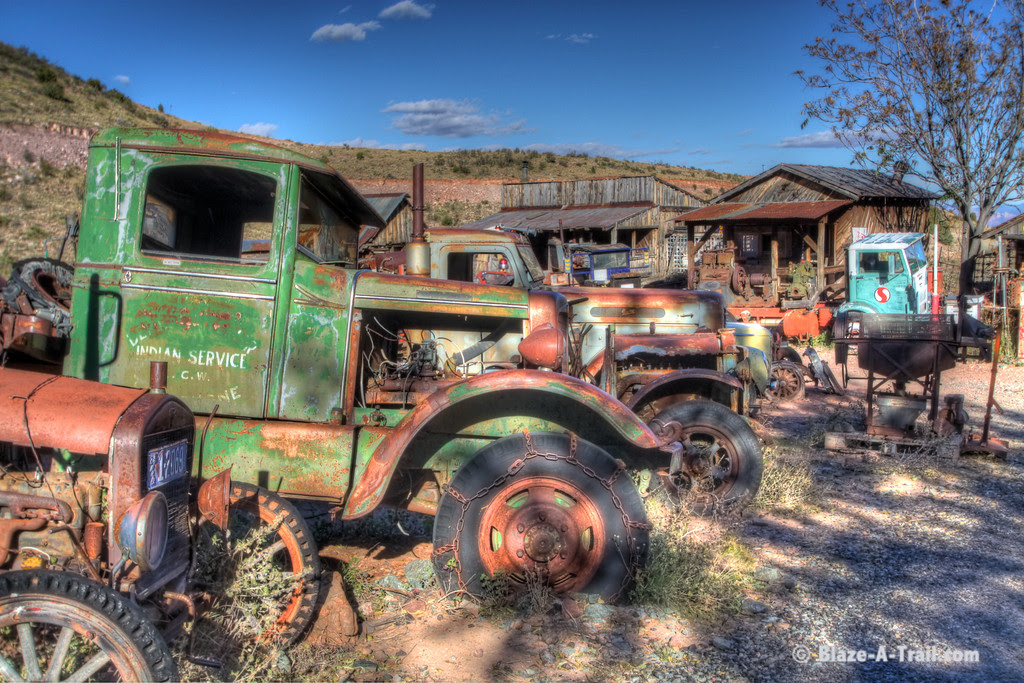 Needless to say, this was a photographers dream find (the mother load!)  I actually met owner Don Robertson and this old timer was glad to show me his 1940’s Harley Davidson motorcycle (with NOS attached) and 1928 Indy Race Car.  Don has a full crew of workers restoring the various machinery on this historic property.  Although some might call this a junkyard, I would venture to guess that his property and equipment is worth millions at auction. 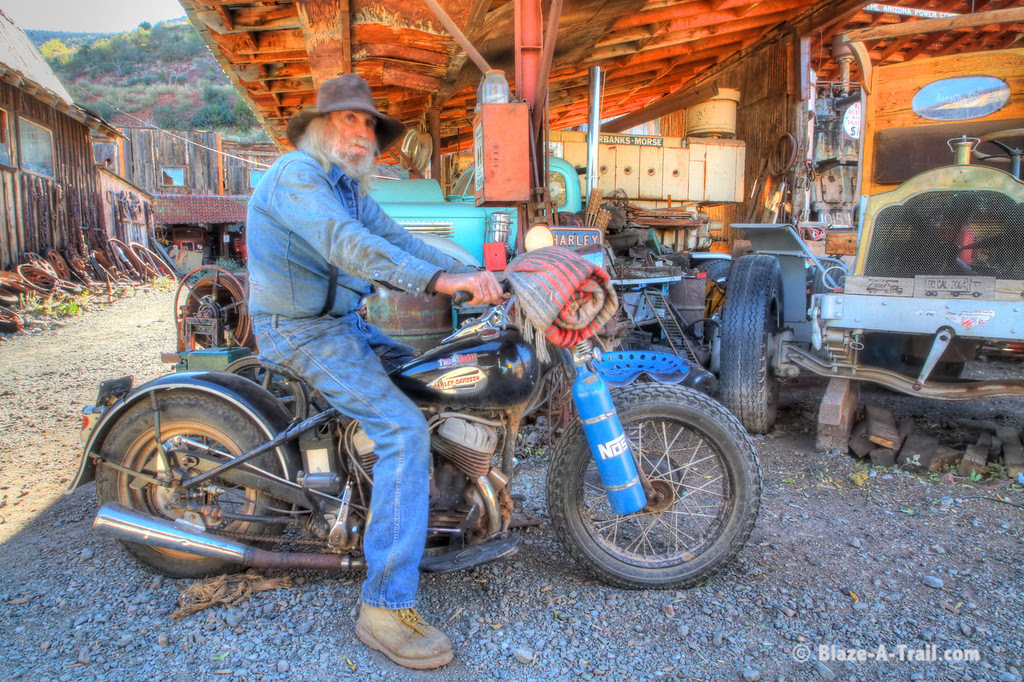 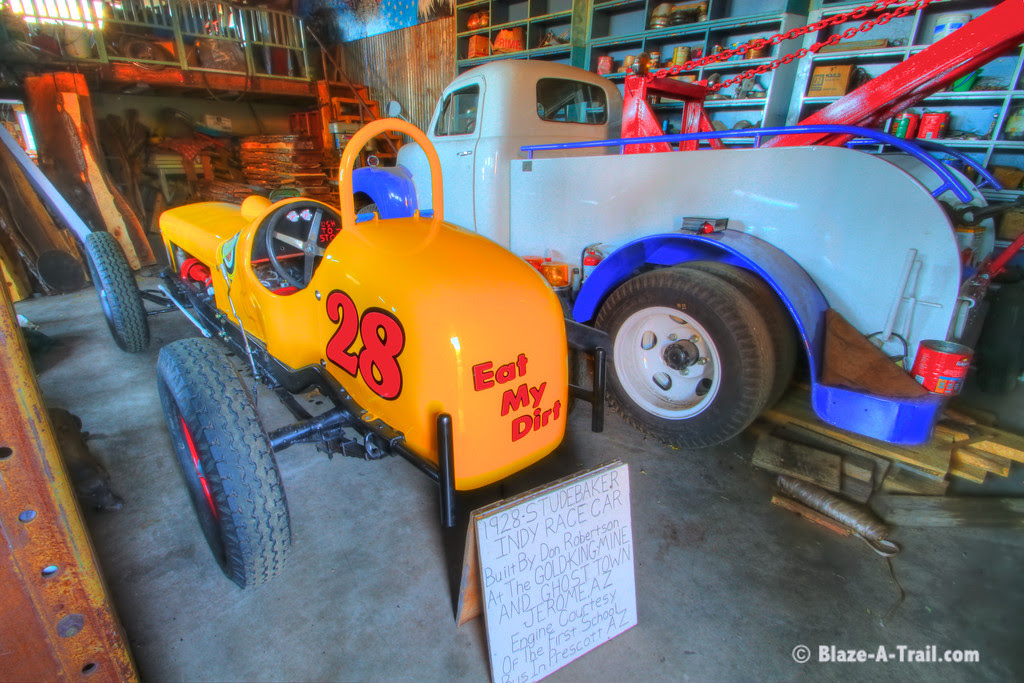 If you are interested in finding something authentic off the beaten path in Jerome, then this might be the place for you (especially if you're a photographer or interested in mining equipment and vintage trucks/machines.)   This Arizona Excursion was a jewel of a find and I would highly recommend a visit to Don Robertson’s Gold King Mine!
See these photos and more at:
Gold King Mine Photos on Blaze-A-Trail.com 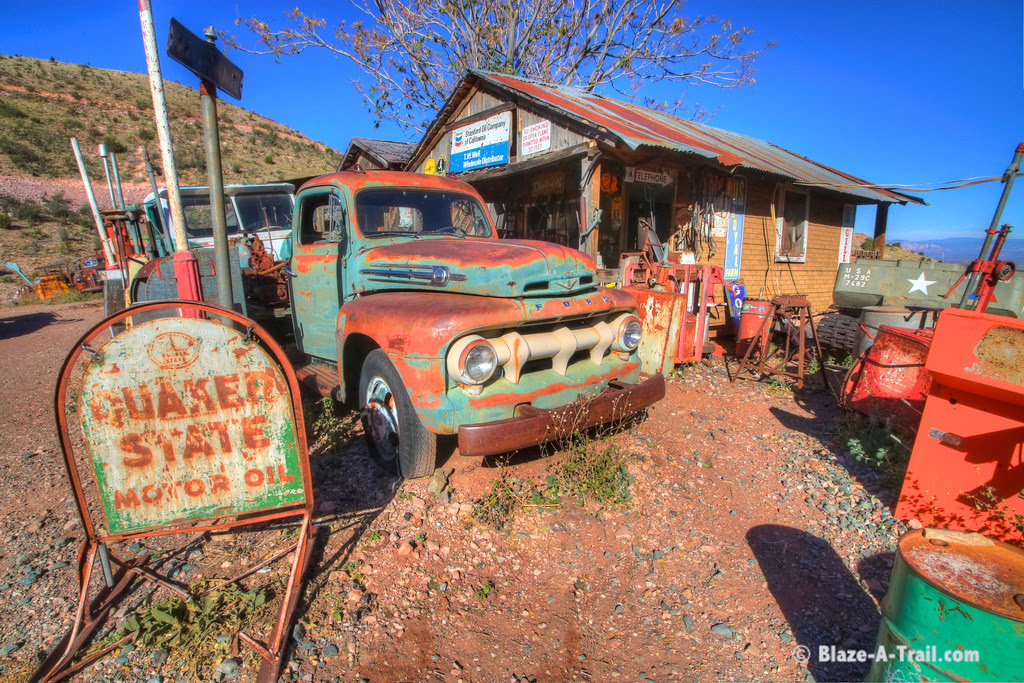 Brief History of Jerome, Arizona:  “The history of Jerome is a story of tough men against a rough mountain.  It’s a story of hard rock, hard work, hard liquor and hard play.  Jerome is a mining town propped on a thirty-degree mountainside two thousand feet above the Verde Valley floor in central Arizona.  Few towns, if any, are more precariously anchored on an inclined plane.  The town’s main streets are switchbacks in an arterial highway that snakes over Mingus Mountain.  Fifteen hundred vertical feet separate the upper-level houses from the lowest dwellings in the Gulch.

In 1876, Al Sieber, General George Crook’s able scout who knew about copper, staked the first claim in these hills.  By 1929 the population of Jerome had soared to fifteen thousand.  There were 2,345 working mines.  More copper was coming out of Arizona than any other state, and the United Verde produced $29 million worth of ore in one year alone.  However, the stock market crash of 1929 foreshadowed the Great Depression.  The bottom fell out of everything including copper.  The miners of Jerome scattered to WPA jobs, leaving only 4,748 hillside dwellers. 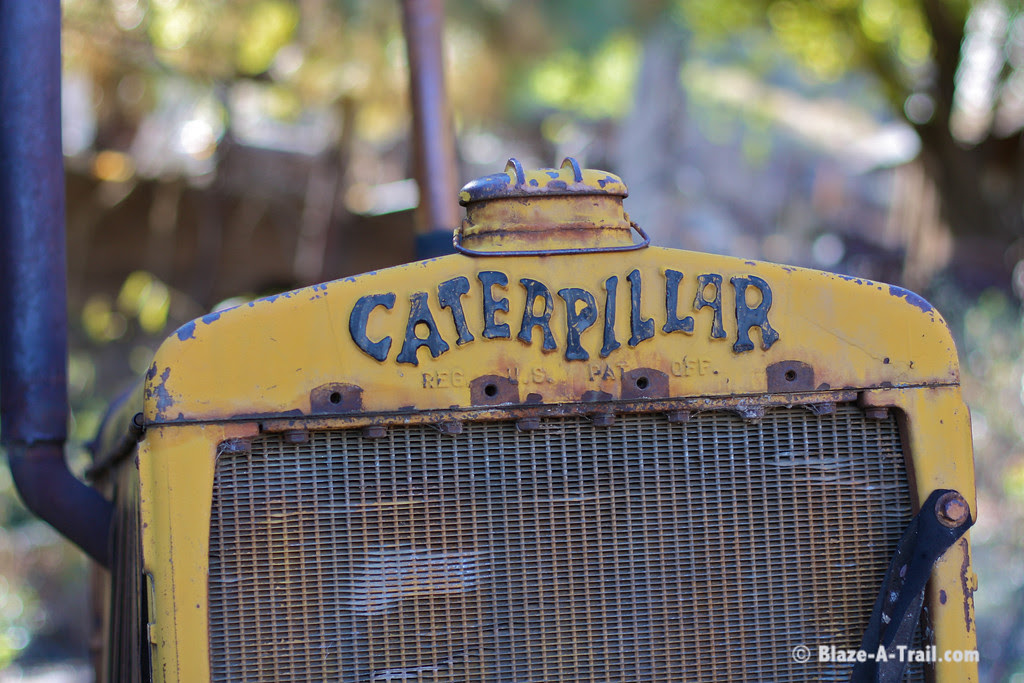 Along came Phelps Dodge and, with faith in the future, set to reopen the mine and smelter in 1935.  During the Second World War the great demand for copper needed for shells, ships, power and communications equipment rapidly depleted the known ore deposits.  Fortunes were spent in electronic geophysical explorations for more ore-bearing bodies.  The known deposits of ore at Jerome were exhausted and in 1950, the smelter fires were again shut off.  On January 30, 1953, headlines in a Phoenix newspaper read “END COMES TO FAMED JEROME MINING CAMP—PD Drags last Ore From Holes—Jerome, one of Arizona’s great mining camps, will die as a mining town in about two months…”  (Excerpted from a Western National Parks Association pamphlet titled “Jerome – Story of Mines, Men, and Money)