I had the great experience of working in Yellowstone National Park in 1992 at the ripe old age of 19.  One evening, someone shouted throughout the dormitory that there was a beautiful sunset outside.  About 50 people went outside to witness this so-called beautiful sunset.  And most of the people were looking at it as if it was the most spectacular thing they’ve ever seen.  It had some yellow and…. That was it.  No pink, purple, fire orange, blue, etc.  It didn’t streak across the sky.  I recall being VERY disappointed that I was bothered for such a miniscule sunset.  Then I got to thinking, most of the people that work in Yellowstone are from all over the USA and other countries.  Apparently, beautiful sunsets are hard to come by in Pennsylvania, Michigan, North Dakota, Iowa, New York, Nebraska…. What these people were witnessing WAS probably the most spectacular sunset they’ve ever seen.  Being from Arizona, the sunset I was looking at that day would be classified in the ‘barely pretty’ category. 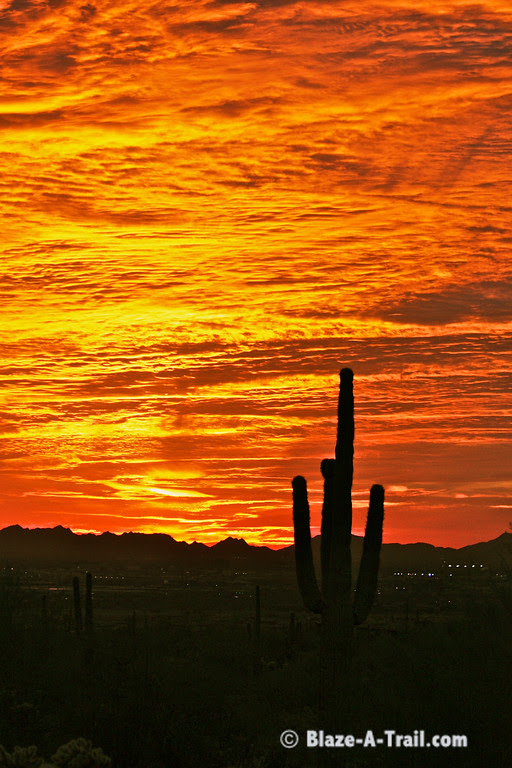 Until I spent a whole summer away, I never really fully appreciated what we had in Arizona.  As many of you know who live here, a beautiful sunset in Arizona is fairly frequent.  Then, during monsoon season….. LOOK OUT!  Sadly, many people in Arizona rarely even notice them on their way home from work, most likely because if you miss one, there will probably be another one in the not to distant future.  That’s the other thing I noticed in Yellowstone that summer.  These folks from other states didn’t waste a single sunset.  I presume it’s because if they did, it may be months before another appeared.

My good friend Todd and I have been friends for 30+ years.  We are intentional about getting together often to enjoy each other’s company and to find out what’s going on in our lives.  Just before Thanksgiving, we decided to go on a hike in the McDowell Mountains in Scottsdale.  The three of us, including Todd’s 3 year old son, began our hike in rather cloudy weather.  And, as it started out, our moods were rather cloudy as well.  We weren’t too thankful….We were commiserating about how stressful certain parts of our lives were including how bad things were in our respective businesses (and wondering when things would turn around – does anyone know?)  We couldn’t go long before needing to turn around as it was going to be dark soon.  Todd’s son was visibly upset about turning around because we hadn’t conquered the mountain yet!  As we headed back, the sun popped below the cloud layer and well….. see for yourself 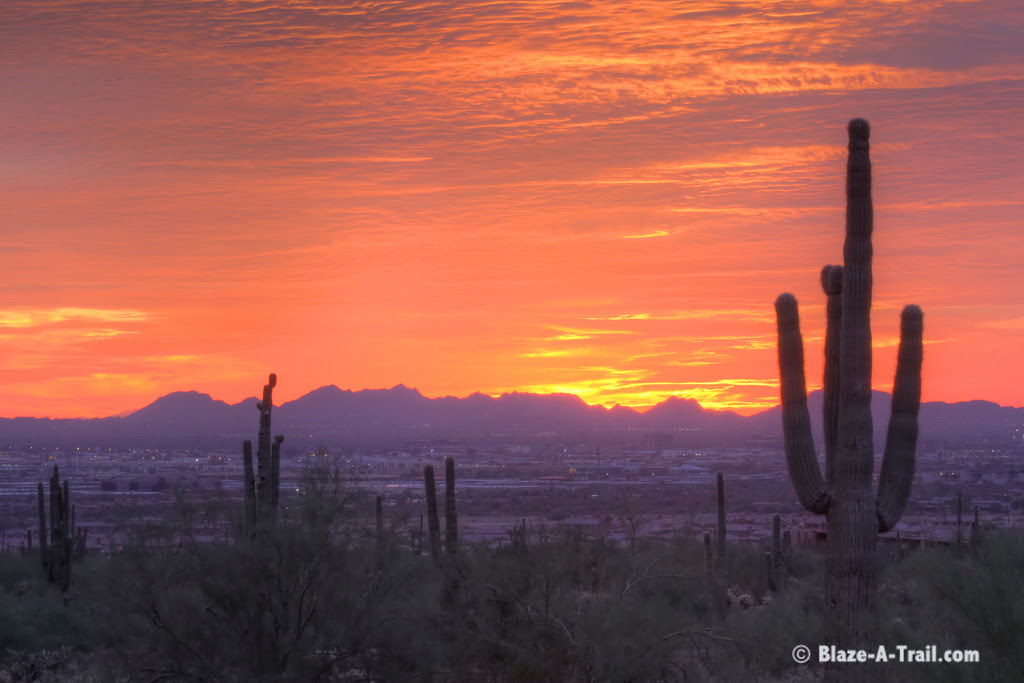 Nothing like being caught without a tripod!  Todd and I were scrambling looking for a place to rest my camera so it could capture the glorious view we were witnessing.  I wanted to get a big saguaro cactus in the frame so I went off looking for the best location.  Todd basically picked up a boulder and walked it down the trail following me!  I think he was more excited about getting the picture than I was.  I spent the next 5-10 minutes laying on the ground with my camera on a rock hoping there weren't any scorpions or rattlesnakes in the nearby vicinity. 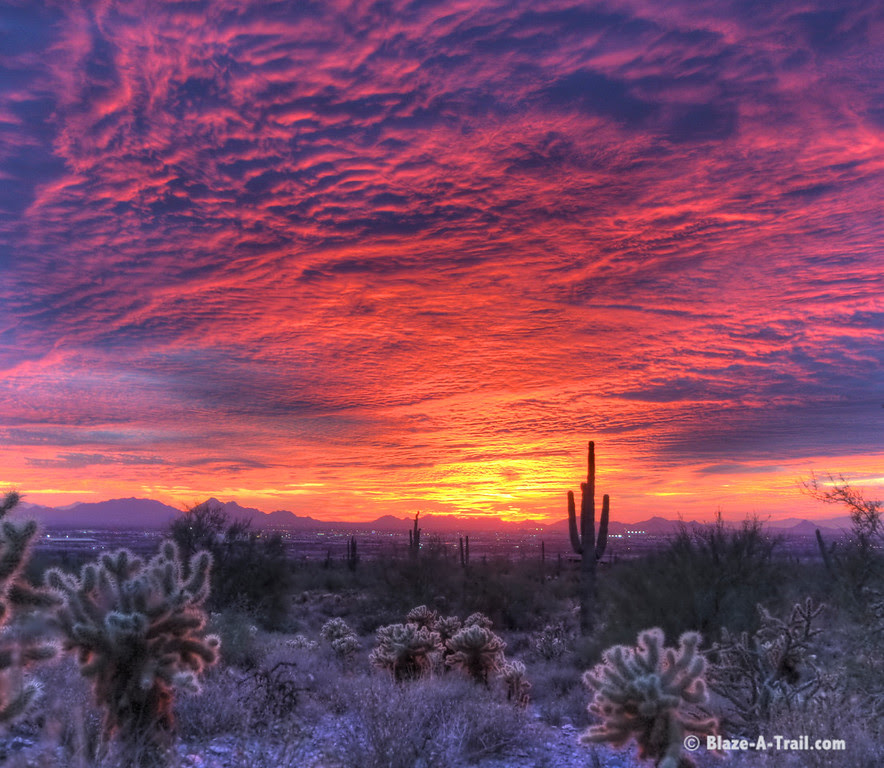 When it was all said and done, we both agreed that there was a reason we were both in this place at that precise moment to witness this Majesty unfolding before our very eyes.  Our mood immediately changed to one of thankfulness and appreciation.  Nothing like a swift kick in the head (or the eyes this time) to realize just what we have in this life.  We are truly blessed to be where we are, have the families, friends and health that we do and the jobs that we can go to.


It doesn’t matter how bad a day I’m having, if there’s a worthy sunset, I’m going to breathe it in.  It’s one of God’s gifts we are blessed with out here.  Mix in big open spaces, lush deserts or beautiful mountains and there’s no end to the beauty a sunset can deliver.  As a native of Phoenix, I understand scorching heat, but also know that 8 months of the year can be classified as incredible weather.  I really don’t know what it’s like to have a ‘White Christmas’ or experience the colors of fall (unless we travel north or south), but there are few places on earth that compete for the best fire in the sky.  And for that, I’m thankful and count myself blessed to be living in this small corner of the globe. 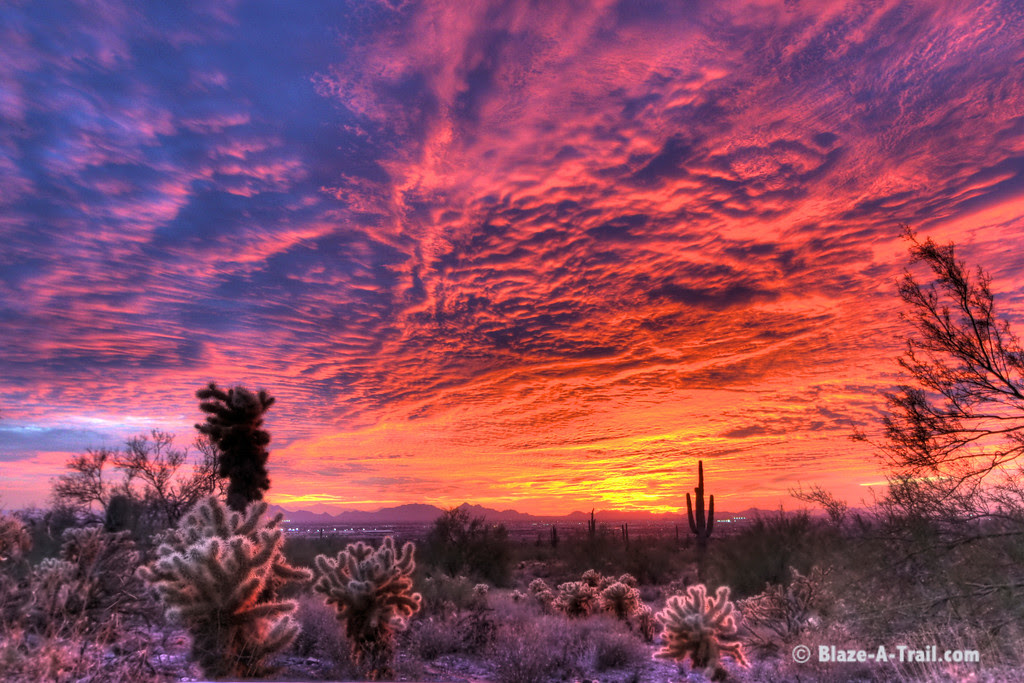 Check out these photos in higher resolution and bigger sizes:  http://www.Blaze-A-Trail.com/